We live in a broken world, don’t we?

Politics are a mess … the media doesn’t always tell the truth … people are mistreated … the laws need changing … entertainment is warped … the list could go on and on and on.

We live in a broken world.

Do you want to know what I believe?

I believe that the reason God placed YOU in this world is because it is broken and it needed someone just like you to heal its brokenness.

We all know what John 3:16 days, “For God so loved the world, that He gave His only begotten Son, that whoever believes in Him shall not perish, but have eternal life.”

“For God did not send the Son into the world to judge the world, but that the world might be saved through Him.”

Jesus didn’t come to judge us … He came to save us!

He came to save us from sin, from politics, from opinions, from waywardness, from confusion, from pain, from hatred, from war, from anger, from sickness and from death.

I also know that often He needs to save me from myself.  Isn’t that the truth?!

He came to save us and to give us a new way of living … of thinking … and of processing life!

You see, when we partner with Him in loving this broken world … miracles happen! 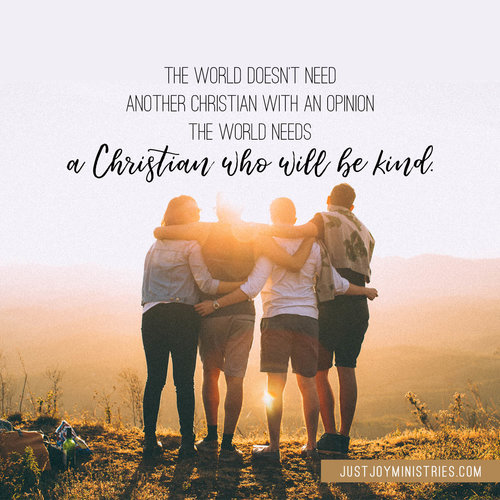 The world doesn’t need another Christian with an opinion – it needs a Christian who will be kind.

The world doesn’t need another religious person to judge it – it needs a gentle word and a loving smile that will serve as a source of encouragement.

This doesn’t mean that we accept the sin and gloss over the compromise – what it means is that we are kind in spite of it.

Your opinions will never change this world – but your joy might change it!

Your judgment will never revolutionize this world – but your heartfelt goodness might do the job!

Your negativity will never deliver this world – but your kindness might make an impact!

Can I tell you a story?

I’ll try to make it short and I really don’t mean to glorify anything that I have done … I just want to remind you that kindness matters.  It matters very, very much.

It was the summer of 1996 and our family home was on a busy street in a small town in North Carolina.  I would often sit on the porch while my boys played basketball in the driveway and while my little girls decorated the sidewalk with all kinds of amazing chalk designs.

One day while we were outside enjoying an August afternoon, I noticed two young men walking up our driveway. I immediately recognized them as Mormons because of the way they were dressed and due to their clean-cut appearance.

I judged them before they even opened up their mouths.

They chatted with my boys for a while about Michael Jordan and about who was going to have the better team that year – UNC or Duke – and then they marveled over my daughters’ sidewalk masterpieces.

I knew that I was next.

As they paused on the front steps, I pondered what to say to these two boys whose belief system was so very different from mine.

They smiled and introduced themselves and asked if they could have a minute of my time.

Being the softie that I am, I said, “Sure! Join me on the porch.”

While they were settling themselves, I went into the house and brought ice-cold lemonade out for my five children and for these two young men.

It also gave me a minute to pray.

After I came out with red plastic cups and with store-bought cookies, I settled myself back on the porch swing and let them take a gulp or two of the refreshing beverage.

I then took a deep breath and then said, “Look – I know that you are Mormons and that you have come to talk to me about your faith and to try to convince me to believe like you do.  But I never will.  I believe that Jesus Christ is the only Son of God and the Savior of the world.  I believe that He died on the cross to forgive me from my sins and that it was a complete work.

I really don’t want to argue or debate with you but I know that you are far away from your moms and I am a mom.  So – if you need anything while you are here – let me know. If you need to do laundry, or need advice or just want to hang out with a rowdy family – you are welcome here.”

One of the boys looked at me and sheepishly said, “Can you give us the name of a dentist? I have a really bad toothache and don’t know what to do about it.”

I got up from the porch and called our family dentist who was also a believer and made an appointment for the young man who was far away from home. I also told the dentist what my strategy was and told him to bill us for the appointment.  My sweet dentist said, “Carol – you can’t afford to do that.  The first appointment will be on me and then we will see what we can work out.”

The young men left that afternoon after shooting a few hoops with my boys and I assured them that they were always welcome to just stop by.

After that afternoon, I often saw them on their bikes, in the grocery store and just around town. They would engage with my children and would always chat for a minute or two with their North Carolina mom.

Then Hurricane Fran hit my small town during the first week of September.

We were without power for over a week while other parts of the community didn’t regain power for nearly a month. My town looked like a war zone with trees scattered all over streets, houses and cars.

One day, shortly after our power came back on, my two young friends from Utah came walking up our driveway.  They looked hot and bedraggled.  When they told me that they still didn’t have power and wondered if they could do a load of laundry, we welcomed them into the cool of our delicious air-conditioned home.

They did their laundry, took showers in the kids’ bathroom and then I fed them dinner right along with our kids.  We didn’t talk about religion or about differences but they told us about their younger brothers and sisters. We laughed and talked and ended the evening with a rousing game of Uno.

Several days later these boys appeared at my front door again with notes from their moms thanking me for being kind to their boys.

I never saw them again. But I was honored to love these boys who were so very different from me.  It was the plan of God for me to be kind to these young men whose worldview was in direct contrast to mine.

I don’t know if they ever came to Christ or not but what I do know is that their world was touched by the love and compassion of a believer.

Oh – I could have argued with them!  I could have put them in their place theologically but I felt called to love them in spite of our differences. Sometimes words are cheap but actions will always be priceless.

This world may seem broken to you and to me but it becomes a place of miracles and of wonder when we respond like Jesus would respond. 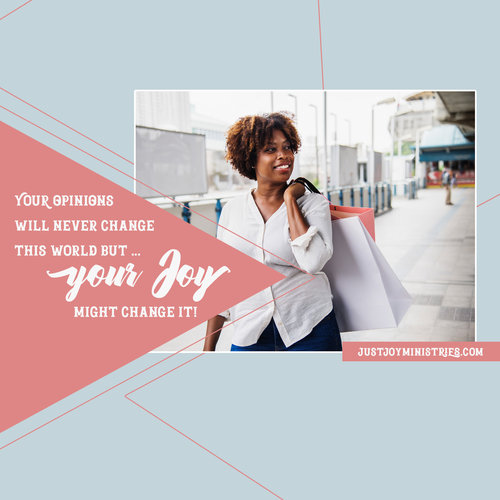 So – rather than spew opinions on Facebook this week … just be kind.

Rather than judge your neighbors … be good to them.

Rather than criticize the media … pray for them.

Restore the wonder to this broken world!  It is, after all, what Jesus would do and it is why you are here!

We live in a wonderful world simply because you and Jesus are in it!

Thanks for listening to my heart this week.  As you know by now, my heart is truly not a perfect heart but it is a heart that is filled to overflowing with gratitude for the life I have been given and for the people who walk with me.  And, it continues to be a heart that is relentlessly chasing after God and all that He is!